Capital city: Addis Ababa Population ( 2017): 105 million Surface area:1.13 million sq km (437,794 sq miles) Languages: Amharic (official language) Oromigna ,Somali, Afar and Tigrinya. English is also the administrative language. Religion: Ethiopian Orthodox Christianity, Muslim and Protestant Christianity Topography: Ethiopia has an elevated central plateau varying in height from 2,000 to 3,000 meters above sea level. There are around 25 mountains whose peaks reach over 4,000 meters in the North and the Centre of the country. The most famous Ethiopian river is the Blue Nile which flows a distance of 1,450 kilometres from its source to join the White Nile in Khartoum. Currency: Ethiopian Birr (ETB) Time: GMT+3 Telephone code: +251 Electric supply: 220 Volts 50 cycles AC (Adapters can be easily found in all major cities).

Ethiopia is the tenth largest country in Africa with it`s rich cultural heritage and incredible diversity both in its people and landscape. The major ethnic/linguistic groups are the Oromo (34.4%), Amhara (27%), Somali 6.2%), Tigray (6.1%) and Sidamo (4%). It’s economy is dominated by subsistence agriculture. Coffee accounts for 55% of Ethiopia’s exports. It`s vast plateaus and craggy peaks of the Simien and Bale mountain ranges are breathtaking and home to much of Ethiopia’s wildlife, including the endangered Walia ibex, the Gelada Baboons and the Ethiopian wolf.

The remarkable Danakil Depression is one of the lowest, hottest and driest places on Earth. Looking like something from another planet, its bubbling lava lakes, vast salt flats and steamy fields in vivid greens, reds and yellows are unlike any other landscape on Earth. The tribes of the Lower Omo Valley, adorned with a fascinating array of lip plates, body paint and intricate beaded jewelry, are just one piece in Ethiopia’s complex and richly varied cultural ad unique life style. 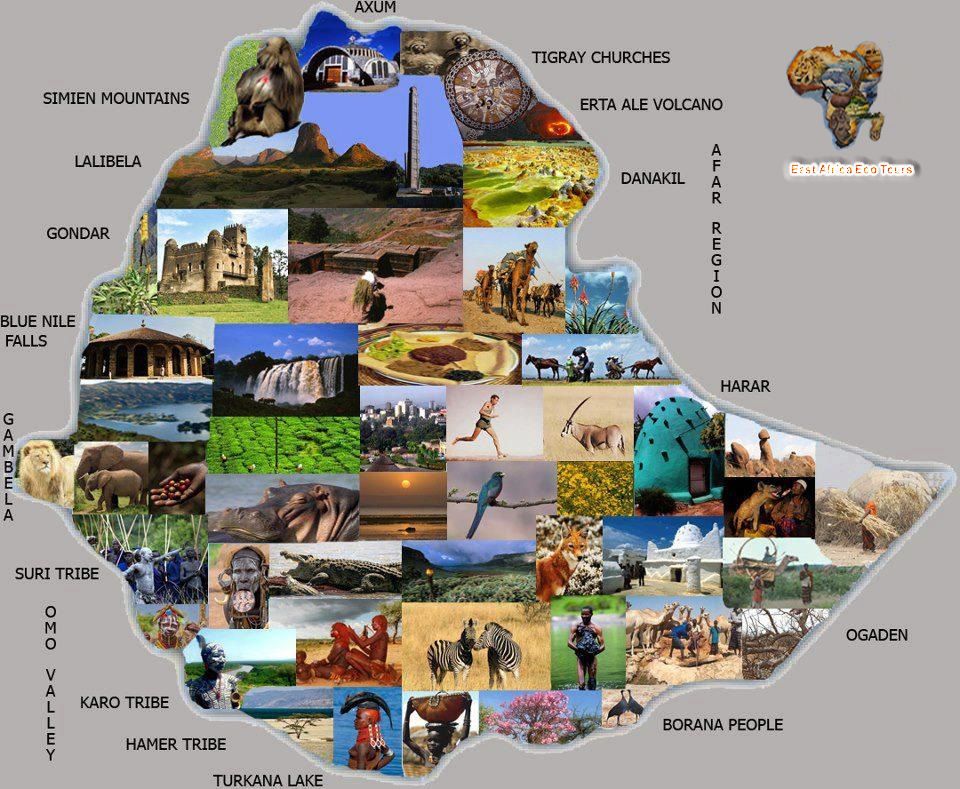 Ethiopia is the only country in Africa with its own alphabet. Even though there are more than 80 different languages spoken in Ethiopia, Amharic is the work language, a semiotic language descending from Ge’ez, the language of ancient Axum which is still used by the Ethiopian Orthodox Church.

Amharic has its own alphabet, consisting of 209 symbols and 25 letter variants. Other regional languages such as Oromigna, Tigrinya and Arabic are also wide spoken, along with English, used in the administration and for secondary education.

Amharic is an Ethiopian Semitic language, which is a subgrouping within the Semitic branch of the Afroasiatic languages. It is spoken as a first language by the Amharas and as a lingua franca by other populations residing in major cities and towns of Ethiopia. 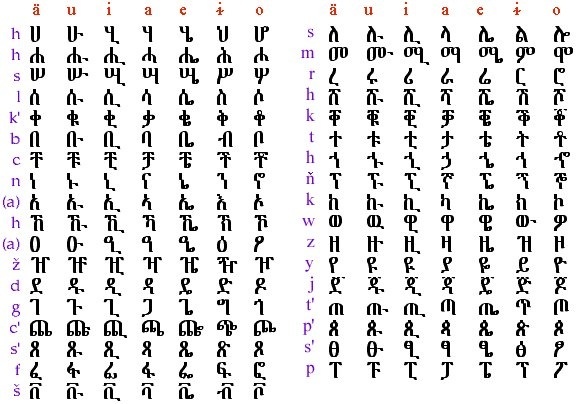 While the others are listed as cultural sites, including the ruins of the city of Axum; the fortified historic route of Harar Jugol; the stonewalled terraces of Konso, (also known as the “natural New York village”).

Also the lower valleys of both the Awash and the Omo River where the evidence of human evolution was found; the eleven rock-hewn churches of Lalibela;, and Tiya with its 32 carved stelae covered with indecipherable symbols.

Ethiopia is amongst the countries that have registered their tangible and intangible heritage under UNESCOs cultural heritage list. According to Ethiopian Ministry of Culture and Tourism, UNESCO has recognized four intangible and nine tangible Ethiopian (a total of 13) heritages.

The Afar desert of Ethiopia, in the Middle Awash, is the early home of our human ancestors. According to the latest research, fossils of Homo gender have been found buried in the soil of this area. This is also the area where “Lucy”, one of the World’s most famous fossils, was also found.

Lucy is the common name of AL 288-1, several hundred pieces of fossilized bone representing 40 percent of the skeleton of a female of the hominin species Australopithecus afarensis. In Ethiopia, the assembly is also known as Dinkinesh, which means “you are marvelous” in the Amharic language.

Lucy was discovered in 1974 in Africa, at Hadar, a site in the Awash Valley of the Afar Triangle in Ethiopia.

HOME FOR THE ARC OF COVENANT

Ethiopia is a home to legendry Ark of the covenant. Ethiopia is considered as one of the oldest Christian nations in the World, adopting Christianity during the 4th Century. It is also claimed to be the home to the legendary Ark of the Covenant containing the 10 Commandments.

This relic is said to be kept in Axum and only one man is allowed to see it. Also, Ethiopia is the home of the Black Jews, known as Beta Israel and Islam also appeared early in Ethiopia when Mohammed’s followers were persecuted and sought refuge in Abyssinia.

The Ethiopian Orthodox Tewahedo Church claims to possess the Ark of the Covenant, or Tabot, in Axum. The object is currently kept under guard in a treasury near the Church of Our Lady Mary of Zion. Replicas of the Axum tabot are kept in every Ethiopian Orthodox Tewahedo church, each with its own dedication to a particular saint; the most popular of these include Mary, George and Michael. 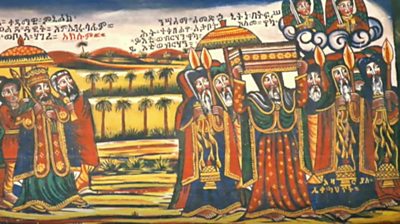 You will be seven years younger when you travel in Ethiopia. Ethiopia is the only Christian country that still follows the Julian calendar and consequently it is seven years and eight months behind the rest of the Christian world (which follows the revised Gregorian calendar). Thus, the Ethiopian calendar consists of 13 months: 12 months of 30 days and another month of five (or six days in leap years) days duration.